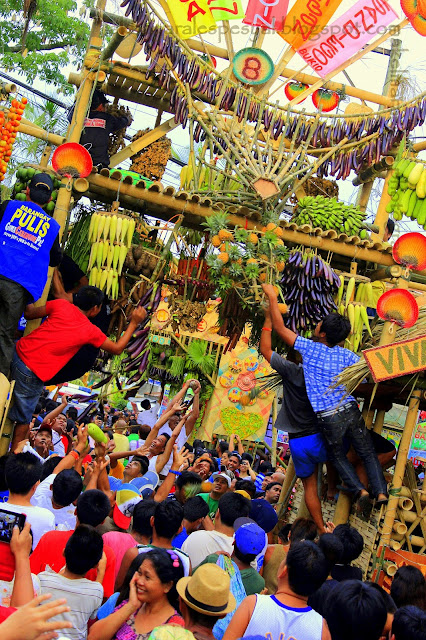 It's not always rainbows and butterflies, as sung by Adam Levine. Yes, Araña't Baluarte of Gumaca may seem beautiful to the eyes with the smorgasbord of fruits and vegetables and even local pastries and delicacies, bursting in a palette of greens, yellows, reds, indigos, any color you might think of are there. That is, before the patron San Isidro Labrador passes. As soon as he turns his back on the arañas and baluarte... IT'S WAR BABY!

No, this is not Pahiyas... It's Araña't Baluarte of Gumaca!

Say May 15, San Isidro, and Quezon; and people will automatically say "Pahiyas!" Well, there's life beyond Pahiyas my friends. Guys, I'd like to introduce to you, the Araña't Baluarte Festival. 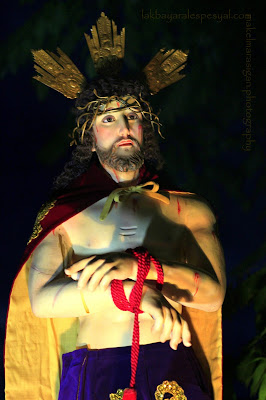 I've seen this image of Jesus joining the traditional Good Friday procession in Gumaca, but it's just this last Viernes Santo that I noticed: Is Jesus dancing? 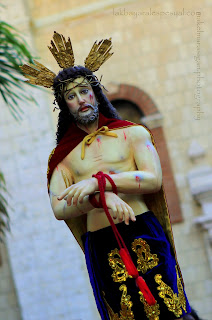 No disrespect or blasphemy intended,

I was initially planning of going to either Paete or the nearer Carcar, Cebu (LOL!) to witness a different semana santa observance there, but I opted to get traditional and spend the long weekend in my hometown Gumaca with my sister.

Good thing about traveling during Good Friday is that there are less vehicles,

Neatly tucked inside the town of Macalelon is the Immaculate Conception Church. Quaint, but packed with a lot of carvings and bas reliefs, particularly the facade. A definite feast for the eyes.

Click here to read more>>>
Posted by Unknown at 1:39 AM No comments:

View from the Top: Conversion of Saint Paul Church

Blame the Moro and Dutch marauders during the 16th and 17th century for this church's magnificent location. Located on top of a hill where one can see the whole town, the sea, and neighboring island of Marinduque stands a church named not after a saint, but an event on the life of a saint.

Built in 1817, this house of worship was constructed under Geronimo delos Angeles. Though the town was founded in the same location as early as 1766, it is only after 51 years that the present church was constructed due to the Moro's frequent raiding at that time. Realizing the strategic importance of Maaliw Hill,  and the finding the lost image of St. Paul under a Pitogo tree on the same hill, they decided to settle in, which is now the town of Pitogo, Quezon

Click here to read more>>>
Posted by Unknown at 4:28 PM No comments:

If there's a church that I know almost every nook and cranny, it will be my hometown's crown jewel. Located in Gumaca, province of Quezon, is the seat of the Diocese of Gumaca, the San Diego de Alcala Cathedral.

Already registered in the Franciscan annals as early as 1582, Gumaca is considered one of the oldest towns in Quezon. With the town's establishment is the building of the church; a sign of Spain's christianization and declaration of authority.

However, due to frequent moro raidings, the people transferred to town to Silangan, a town in Alabat Island which faces the former town. But moros, and even the Dutch, did not spared the new town. They were attacked and burned by the Dutch in 1664. Once again, they transferred the pueblo to it's former location in Gumaca's shores for good.